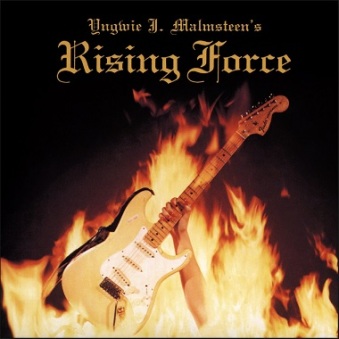 I’ll be honest, when I first heard Yngwie (pronounced ING-vay) I thought someone was playing a rock guitar album too fast (I had a similar reaction to Paul Gilbert as well). Seriously, it seemed physically impossible to have such speed and fluidity. I listened to that first album by Lars Johan Yngve Lannerbäck in the dingy basement of my friend Nick’s house. The basement also housed a ratty, cigarette smoke infused sofa that I would be forced to sleep on if I stayed over. Nick was a great guitar player, really poured himself into it and was the first friend I said, in my head, ‘holy shit he’s good’. And he was good, he could play Yngwie, Vinnie Moore, Tony MacAlpine, basically any of the new breed Yngwie’s arrival in America brought to light.

Quick history lesson, Shrapnel Records was founded in 1980, under the helm of Mike Varney, and ushered in the neoclassical period in rock guitar. If you played heavy metal shred guitar, you knew who Varney was. The artist roster ranges today from blues great Chris Duarte to fusion monster Mike Stern but then, starting in 1982, it was about the shredders. Greg Howe, Tony Macalpine, Paul Gilbert, Vinnie Moore, Shawn Lane, Marty Friedman, Blues Saraceno, Ritchie Kotzen and top dog Yngwie, all were in the Shrapnel fold.

Yngwie was the viking, literally, at 6′ 3″, approximately 190 cm, he is an imposing and charismatic figure to watch. He took the bar from where mere mortals could still get a finger on it all the way to the stratosphere, coincidentally on a 1971/72 Fender Stratocaster affectionately known as “The Duck”. The guitar is prominently set on the cover image above.

From the opening of the 1984 album with the song Black Star, you knew you were in trouble. Where Eddie Van Halen had approached guitar with blues rock as the foundation, Yngwie ferociously went classical, citing the composer Johan Sebastian Bach and virtuoso violinist Paganini as key influences. Invoking the baroque, the 21 year old Swede taught us a lesson about history repeating and re-purposed classical music through the distortion of his speaker cabinets.

But let’s get back to the guitar, The Duck was originally Olympic White but as the finish over the alder body aged, it took on creme-to-yellow color. It was purchased by Malmsteen in 1978 in Sweden, reportedly from a drummer who was trying out for Yngwie’s band. The neck is maple with a maple fingerboard and jumbo frets. The stratocasters in the 70s were odd compared to any other time, the headstock on the 70s strats was larger than the original stratocaster from the 50s/60s and Fender employed a cost cutting move to go to a 3 bolt neck plate and the “bullet” truss rod, see:

These differences add to the distinctive tone of the era from the Fullerton Fender factory that, quite honestly, was probably the least popular era for Fender, historically. Yngwie obviously disagreed and claims that the larger headstock increases the sustain of the guitar. His current Signature model, the neck has the bullet truss and large headstock but eschews the 3 bolt neck for the more stable 4-bolt configuration.

Additional modifications were also made, while apprenticing at a local luthier, Yngwie saw an instrument with a scalloped fingerboard. Scalloping takes a small amount of wood from between the frets (those shiny metal thingies on the neck that divide the fingerboard) and leaves a concave surface. Yngwie was impressed with the way it felt and proceeded to perform surgery on his prized Stratocaster. Another hero of Yngwie was Ritchie Blackmore of the band Deep Purple, Blackmore employed both a scalloped neck and also was known for his mixing of classical themes with blues based rock and roll. Players such as John McLaughlin, Steve Vai, Herman Li and Uli Jon Roth have used partial or fully scalloped necks.

The thought is that the guitar frets easier, with less friction, and maintains a slightly different tonal character because the string never touches the wood of the fingerboard while playing normally. On a non-scalloped neck, the player consistently “anchors” the string to the fingerboard material. String bends are also vastly different because the radius (or curve) of the fingerboard doesn’t “fret-out” on multi-step bends with a scalloped neck. Those benefits aside, scalloping makes the instrument much harder to play in a tonally correct fashion. Due to the depth of the scallop, notes can be bent out of tune with just a little extra pressure.

Finishing out the neck customizations was a nut made of brass. Traditional materials for the nut are bone (real or synthetic) or resin/plastics but brass is softer and less dense. As such, it absorbs string energy making for a less bright tone. These features, combined with replacement pick-ups (first Dimarzio and later Seymour Duncan) running through Marshall 50 watt amplifiers made for the stunning music found on Rising Force. The name “Duck” originates from the Donald Duck sticker on the headstock paired with the “TV Yellow” color the guitar is today.

Known for his theatrics, such as spinning his guitar behind his back and throwing the instrument in the air, the neck on the Duck didn’t last long and has been replaced numerous times mostly due to broken headstocks. “The Duck” and the “Play Loud” guitars, are featured on all of Yngwie’s albums and tours up through ’94 where they were put into slightly less precarious roles of recording and home use. Yngwie was only the second artist, after Eric Clapton, to have a signature guitar created for him by Fender and the Rising Force album certainly helped that process along. He tours today with a “Play Loud” replica and a number of his signature models.

Yngwie remains a prolific creator in the shred space and has some 25 albums in addition to several live recordings. A technical master, Yngwie has been accused of being one dimensional in the music he creates but honestly, he does what he does better than anyone and he remains an ambassador for those fans that adore that style of which I count myself. I will always have Yngwie on my play lists, my favorite song by him is a toss up between Blue and Brothers. Both links are to live videos on youtube, I implore you to watch as his abilities are simply awe inspiring.

Next time I tackle Peter Frampton’s Phenix, that is a remarkable story. Thanks for stopping by.