It was five days until my eighth birthday when AC/DC released their first album. I still lived in Maine, my parents hadn’t yet divorced and the USA was preparing the bicentennial with the tall ships in Boston in just 2 months. I remember gas was 20 cents a gallon and there weren’t any video games other than pinball. Prime time television was the Six Million Dollar Man, Wonder Woman, Mary Tyler Moore (RIP), Happy Days, Laverne and Shirley, The Jeffersons, All in the Family, Barney Miller, Welcome back Kotter……gasp, gasp…just maybe…gasp…. the best year in television ever. Meanwhile, half a world away, the Young brothers (Malcolm and Angus) along with their older brother Harry (an accomplished member of The Easybeats), produced an incredible debut album called High Voltage. Joining them were Phil Rudd on drums, Cliff Williams on bass (though George Young plays on 2 tracks) and the amazing Bon Scott on vocals. The guitar Angus chose? A late 1960s product of Kalamazoo, Michigan, the Gibson SG (some say 1968, some say 1970).

Angus is a smaller guy, I think just 5′ 2″ (155 CM) and he wasn’t going to be blasting all over the stage like he does with a Les Paul or Flying V, he needed something more manageable. A Gibson SG is a double cutaway (has two horns by the neck), slab style guitar and it’s light at just about 6 pounds, a full 3 pounds less than most Les Pauls. Angus bought that guitar in 1971-72 from a shop in Sydney but it began life looking a lot different (see right). For starters, it had a Maestro Tremolo arm and tail piece, that was changed to a stop bar tailpiece since he doesn’t use the tremolo that often. Angus ended up replacing the stock PAF pick-ups with custom wound versions from Gibson to Seymour Duncan (either Alnico 2 or 5 magnets with a DC resistance of approximately 7.5K). All his pickups were potted to reduce micro phonics, potting dips the pickup in wax to seal the copper wire. It keeps vibration from happening and causing unwanted feedback, you can literally talk into micro phonic pickups and hear your voice through the amplifier.

The body and neck are mahogany with Grover kidney bean (named as such for their shape) tuners and trapezoid inlays on a 12 inch radius, bound rosewood fingerboard. SGs are a little special, despite having a scale length equal to a Les Paul, the neck almost feels longer. Undoubtedly this is due to the short neck heel where it feels like the neck “sticks out” too far. Nothing sounds like one, Pete Townsend, Duane Allman, Derek Trucks, Eric Clapton and Tony Iommi all rocked the SG. The tone and volume pots have been replaced numerous times as Young uses no effects other than those controls to alter his sound. He runs his SG directly into a wireless unit, the Schaffer-Vega Diversity, which outputs to multiple Super Lead Marshall 100 watt amps (these days he uses a modern wireless but the compression/expander functions of the Schaffer-Vega system have been incorporated into an “effect” called the Schaffer Replica). Angus uses Ernie Ball .09-.42 gauge strings and standard tuning.

Angus uses basket-weave Marshall cabinets loaded with 25 watt Celestion Greenback speakers. Greenback helps add to a recipe that has been used by many players, Gibson into a Super Lead (Model 1974 Marshall) into Greenbacks. 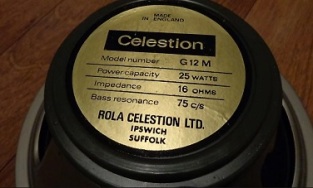 That has been the Angus sound for 45 years so easy yet so hard to sound “just right”. I’ve learned so many AC/DC tunes from Thunderstruck to Live Wire. Between Angus Young with the Back in Black album and George Lynch’s Under Lock and Key, I was set into the path of guitars, for life. Back to High Voltage, the album kicks off with “It’s a long way to the top (If you want to rock and roll)“, a song I played with a couple bands. It proceeds through the raunchy “The Jack” and the blues fueled “Live Wire” with side two starting with the favorite “TNT” (this is a great live version from the Donnington festival from 1991). You can hear the Chuck Berry and Little Richard influences all over this and early AC/DC albums.

What do I say about what Angus and his brother Malcolm have done for rock and roll? How can I even put that into a bucket? Who have they influenced in rock? Every guitarist born after 1965. Period. Yeah, even you there ducking behind your EDM and pop, even you. They, having sold almost 300 million albums worldwide, have impacted everyone. “Night Prowler” is probably my favorite Bon Scott tune, “Have a Drink on Me” for the Brian Johnson era. AC/DC lost Malcolm Young to dementia, Phil Rudd to prison (he cleverly attempted to hire a policeman to kill his wife), Brian Johnson because of his hearing and Cliff Williams announced he was retiring after the the most recent tour ended in September of 2016. Only Angus is left and maybe he can do it, it was always his band anyway but it really feels like it’s over. Axl Rose as the lead singer? What alternate universe is this? Take me back to ’76, when things made a little more sense or more accurately, before they ceased making sense. Next time I take on David Gilmour’s 1968 Stratocaster. Thanks for stopping by.